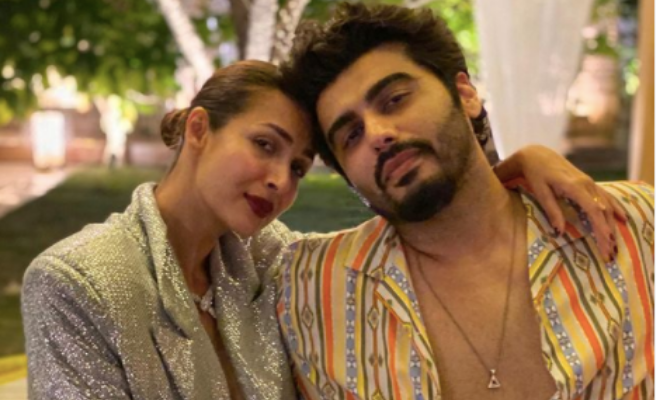 Bollywood romances are epic and if it’s a real-life B-town love story then it’s definitely #goals. We don’t just love Bollywood celeb couples, we literally live through them. And I personally prefer real-life couples more than reel life couples but the only thing that I cannot handle is a break-up. It’s heart-wrenching to see Bollywood celebrity couples, that we have idolised, part ways. Over the last few weeks, there have been some rumours and gossip about Arjun Kapoor and Malaika Arora splitting up and while the duo has time and again rubbished these rumours, it seems like it may or may not be true.

An entertainment portal recently claimed that the duo had parted ways and Malaika Arora has been depressed for the past week but Arjun Kapoor took to social media to rubbish these rumours once again. Yepp, you read that one right. The word in tinsel town was that the couple had decided to end their relationship and just like us mortal girls, Malaika Arora seemed to be extremely heartbroken about it. And while I went through a rollercoaster of emotions in a bid to digest this information, the 2 States actor took to Instagram to share a picture with Malaika Arora and inform the fans that the duo is still very much together. “Ain’t no place for shady rumours. Stay safe. Stay blessed. Wish well for people. Love y’all,” read the caption.

Take a look at this cute post that’s melting our hearts.

According to a news report by BollywoodLife, the actress was sad and had isolated herself. She had not stepped out of her house for over six days now and had decided to take a break from the rest of the world as she nursed her broken heart. The report further suggested that Arjun Kapoor also hadn’t visited Malaika Arora even once during this time even though he went to visit his cousin Rhea Kapoor, just a few days ago, who lives very close to the actress’ place. According to the entertainment portal, sources had revealed that Malaika is usually present with Arjun during family dinners like the one that took place at Rhea Kapoor’s house a few days ago, but this time the actress missed the event.

Sources were quoted telling BollywoodLife that the 2 States actor usually makes sure to visit his girlfriend if he’s around but this time he did not do the same and instead headed back home which hints that all is not well between the duo. Arjun Kapoor and Malaika Arora are more often than not spotted together on dinner or coffee dates but all of that had also come to an end considering the current situation, the news portal had reported.

Also Read: Arjun Kapoor Feels Trolling His Relationship With Malaika Arora Based On Age Is A Silly Thought Process. We Agree!

Just recently, Arjun Kapoor and Malaika Arora became the talk of the town after the actor addressed the issue of the age gap between them. He sent a strong message to the trolls stating that their 12-year age difference does not really bother him.

TBH, we’re just thanking our stars that this adorable couple is still very much together. Plus we love how these two regularly brighten up our social media feeds with the loved up posts!

Malaika Arora Gets Trolled On Her Birthday For Her Age. We Don’t Do That To The Men