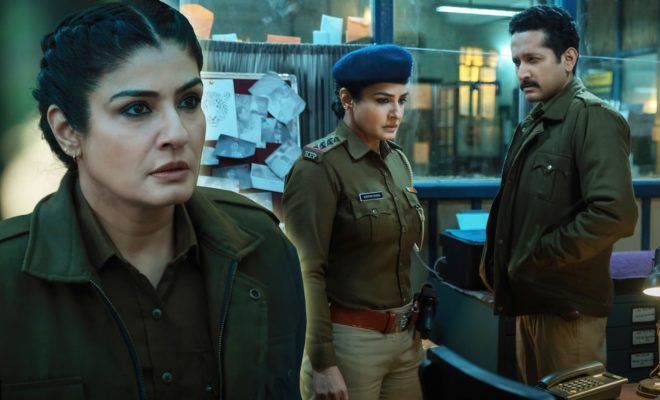 Full confession, as a kid, if anyone asked who my favourite actress was, I’d say Raveena Tandon. As she gets set to make her OTT debut with the series Aranyak on Netflix, I am quite the excited fan, waiting to see how it goes! Netflix left no stone unturned as it dropped the trailer for Aranyak today, amidst the cosy hills of Shillim, a perfect cover for the cosy, fictional Himalayan town of Sironah, where this thriller is set.  The series stars Raveena Tandon, Parambrata Chattopadhyay, Ashutosh Rana, Zakir Hussain and Meghna Malik, amongst others.

The trailer of Aranyak began with a fantastic light and sound pre-show that blew my mind! But not before the incredibly talented cast and makers (minus Parambrata, who isn’t in town) was introduced.

Aranyak is the story of a cop, SHO Kasturi Dogra, who is about to go on a year-long sabbatical to look after her family. She is a wife, a daughter-in-law, a mother. But just as she transfers the charge to a new officer (Chatterjee), the mysterious disappearance of a young female foreign tourist shakes up this uneventful town. As the investigations uncover disturbing secrets, Kasturi must juggle her personal and professional lives, even as an ancient local folklore threatens to bring a mythical angle to the case.

I am so excited to watch this series, which comes with oodles of promise, especially when it comes to the character of Raveena Tandon and her relationship with her family.

Aranyak drops on Netflix on December 10, 2021. Honestly, we cannot wait!

Raveena Tandon Goes Full Glam In An Ethnic Outfit At The Airport And We Love It!