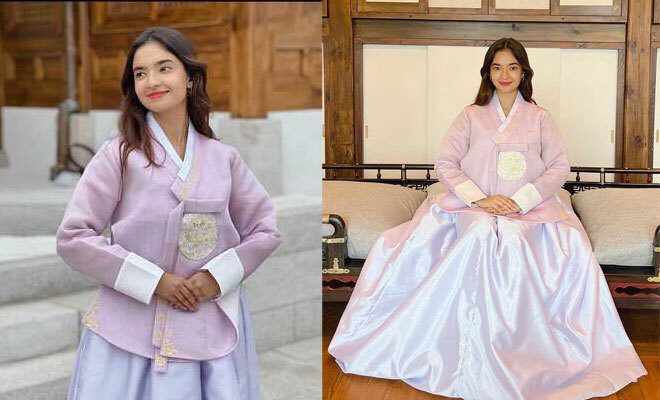 As you know, I love watching k-dramas and I would like to South Korea one day because I want to live my Korean drama dream. However, Anushka Sen is already living my dream as she is currently vacationing in South Korea. From relishing delicious Korean food to wearing beautiful traditional hanboks, Anushka is enjoying her trip to the fullest and it is making us so jealous, not gonna lie!

On Monday, actress Anushka Sen shared some beautiful pictures on her social media account from her dreamy South Korea trip. In the pictures, Anushka can be seen wearing a pink and lilac traditional Korean outfit called Hanbok and she is looking absolutely gorgeous. In the caption, she mentioned that it’s her first time wearing a Hanbok and she’s staying at a Korean hotel that looks like a traditional Korean house and it’s amazing, not gonna lie.

Take a look at the beautiful pictures here:

Her co-contestants from Khatron Ke Khiladi – Divyanka Tripathi and Vishal Singh praised her look. Divyanka called the Baalveer actress an ‘Indo-Korean princess’ and we totally agree with her.

Also Read: Son Ye-Jin’s Agency Confirms She And Hyun Bin Are Not Pregnant, Why People Are Crash Landing On Conclusions?

According to the reports, Anushka Sen is all set to make her debut in the South Korean entertainment industry and we are so ready to see her in a k-drama or a Korean movie.

Well, looks like Anushka has already made many chingus (friends) in South Korea and shared a bunch of pictures with them on her social media account. So much FOMO!