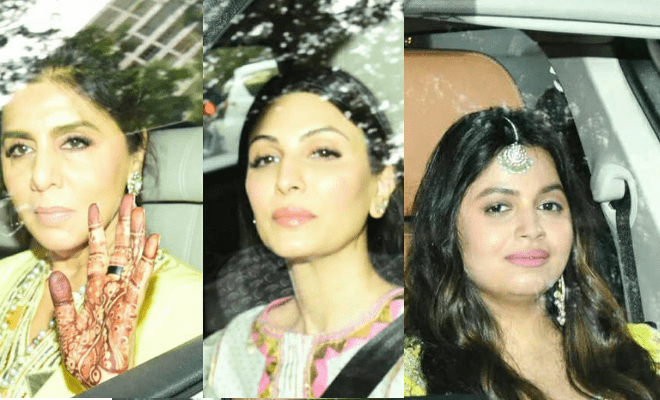 Yesterday was quite eventful for the Bhatts and the Kapoors. After all, the pre-wedding rituals of Alia Bhatt and Ranbir Kapoor started in full swing and we saw both sides looking beautiful and happy as they arrived for the couple’s mehendi function. In fact, it was yesterday, when Neetu Kapoor and Riddhima Kapoor Sahni broke their silence and confirmed that today, April 14, the couple will tie the knot. But before that happens, today is also when Alia Bhatt and Ranbir Kapoor will have their haldi ceremony – which has already started as I type this.

Yep, Alia Bhatt will be all decked up for her haldi ceremony that will kickstart at 9 am on April 14 which will then be followed by her chooda ceremony. And by the looks of Shaheen Bhatt and Neetu Kapoor, it seems as though the actress has decided to stick to the conventional yellow shade for her haldi.

Also Read: ‘Bridgerton’ Season 2 Trailer: Lord Anthony And Kate Sharma Just Turned Up The Heat! Is That A Haldi Ceremony We Spotted?

In fact, Soni Razdan, Shaheen Bhatt, Neetu Kapoor, and Riddhima Kapoor Sahni have already reached the venue – Vastu, Bandra. And I have to say they look absolutely gorgeous as they arrive for Alia Bhatt and Ranbir Kapoor’s haldi and chooda ceremony.

As per reports, after the haldi and chooda ceremony, Ranbir Kapoor with his baraat will travel the distance between Krishna Raj bungalow and Vastu to get married to his lady love, Alia Bhatt. In fact, the road that joins the two houses has reportedly been decorated with lights. Needless to say, Kareena Kapoor Khan, Aadar Jain, Karisma Kapoor, Armaan Jain, and Ranbir’s other cousins and friends will be joining his baraat.

Honestly, I can’t wait for the pictures of their ceremonies to drop. I mean, with them keeping it all hush-hush, the curiosity to know and see what’s happening has increased so much. Is it just me or are even you feeling the FOMO?