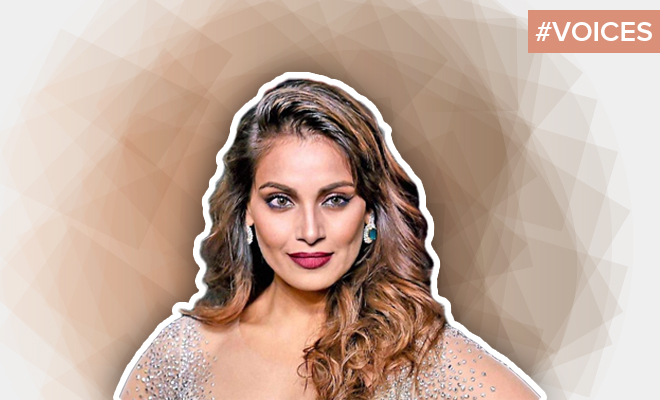 Bipasha Basu has always been one of my favourite actors. She is drop-dead gorgeous, strong-headed and very talented. I remember watching her movies as a child and loving all of them, especially Dhoom 2. Don’t judge me, I was very young and the songs were too catchy. Although every time someone would talk about how good an actor she was or how beautiful she was, they would always use the same set of words to describe her- “dusky” and “sexy”. Of course, I never picked up on that until I grew past my fangirling age.

Being a dusky girl myself, I know just how frustrating it can get when people can’t see past your skin-colour. Yes, it’s a factor, but it’s not the defining factor. All my life, I have had people call me, “that dark-skinned girl” and it’s always made me feel singled out. Of course, thousands of other women sail in this boat with me, but you feel like the odd one out none the less.

And I think that is one of the major reasons why I was always so fascinated by Bipasha. She was one of the very few dusky heroines we had in Bollywood and I think in that way, as a kid and teenager, I kind of identified with her more than I identified with let’s say, Kareena Kapoor. Besides, all through her career Bipasha has been super candid about her opinions and has never minced her words or been diplomatic. And that’s what made me respect and appreciate her more. Okay, enough fangirling, I shall get to my point now.

Recently, in an interview with Pinkvilla, Bipasha was asked whether being called dusky constantly bothered her. Her answer was extremely straight-forward and it outlined all our problems with colourism.

She said, “I was never not bothered, honestly. But dusky, when it was used for me, it was used in every article. So I used to be thinking that I am more than that. It just starts with dusky. Not in a bad connotation. They used to be complimenting me only. But I am thinking when the country, by far and large is dusky why am I different? That’s because the stereotype of the Indian heroine was a fair, petite girl. And I did not fit that bracket so the ‘dusky’ was always prominent and in bold. Every time.”

I think Bipasha has read the mind of every dusky-skinned girl. We have all grown up asking the same questions and fighting the same demons. Of course, on a lower scale. No one wrote about us in tabloids. Besides, she is one of the few actresses to address the existing stereotypes and ridiculous beauty standards that actresses are and were held up to.

She went on to talk about the time she was body-shamed in a tabloid and how it affected her.

She said, “There was one time when I was really really hurt. And I let something affect me from the media was the time when, one of the publication, one tabloid wrote, “Bipasha gets fat”. And it was in bold letters. And there was a before and after picture of mine where the after was actually after, it was not a relevant picture. And I was very upset, but it was a very good awakening for me. So I took it very positively.”

Even though publications continue to cash on people’s vanity and sanity, I am so glad the tabloid-culture has drastically reduced, since this is horrible. How can you print something that? Did no one see how problematic it is back then? Body-shaming someone is always a shameful thing to do but publishing it in a newspaper is seriously messed up. However, we are glad that Bipasha was able to take in her stride and use it to work on herself.

In the same interview, she also spoke about her days as a model and all the struggle she had to endure to get where she is today. She said there was a time when she was living in a truck-drivers colony in Kalina East and splitting meals with a friend to save money.

I guess we never really think about the struggles celebrities go through before they become celebrities. It’s an interesting insight and we are so glad she made it to the top since she now a role model for so many of us.

Bipasha’s story is always so inspiring to hear and I wish all of us can develop the same skill of turning all the negatives in life into positives as she does.