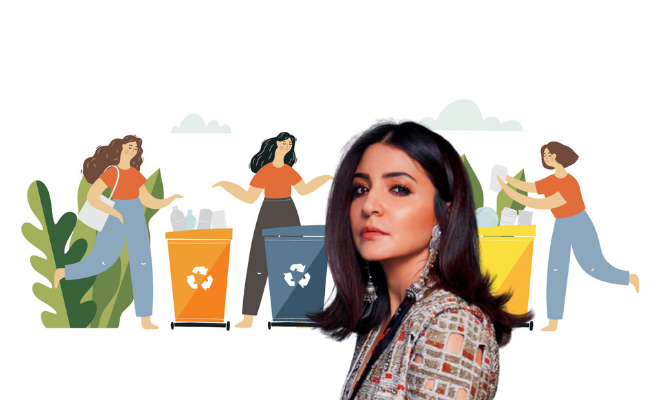 Anushka Sharma Implements Waste Segregation On The Sets Of Her Production House. So Someone In Bollywood Does Care

A lot of people talk about contributing to the planet and living an eco-friendly lifestyle but all they really do is take part in a cleaning drive at a beach once in a while or post a woke message on World Environment Day. Yeah, Anushka Sharma isn’t one of them. The actress is an environmentalist all year round and it shows. I mean, she legit called out a guy on the road for littering when he threw a plastic bottle out of his car, remember? She is not only an advocate of environment conservation but also lives by an example. She constantly does her bit for the planet, that’s not a shocker. However, she recently took an initiative to implement waste segregation on the sets of her production house Clean Slate Flimz and she is the first producer to take such an eco-friendly decision.

Waste segregation is nothing but keeping dry and wet waste separately for better waste management, which a lot of us already practise at our homes and offices too. With this, the dry waste like plastic, glass and metal can be recycled, while wet waste like food, tea and vegetable peels can be composted. This miniscule practise can make a huge difference for the planet. However, it doesn’t happen on film sets apparently which obviously creates massive and disarranged littering. According to Anushka, “Waste segregation at film shoots can make a world of difference and I’m glad that we could implement this on the sets of our production ventures. Protecting the environment is the need of the hour and the industry can contribute immensely towards the cause and also raise enough awareness on the same. We had realized the need to segregate waste to be of utmost importance a while back and I’m happy that we could do this even while we are in the middle of the pandemic.”

Also Read: Katrina Kaif Dishes The Deets On The Lifestyle Changes She’s Made Over The Years To Contribute To Sustainable Fashion. We Are Taking Notes!

Anushka is one of the handful of celebrities in Bollywood who use their platform to educate and aware their fans and followers about the important issues like the environment conservation. Talking about the purpose behind the initiative, the co-founder of Clean Slate Filmz and Anushka’s brother Karnesh Sharma said, “Anushka and I started Clean Slate Filmz with the intent to make a difference at various touch points. One such area to focus for us has always been to reduce waste on film sets. Segregation of waste is the need of the hour and we decided to take all necessary steps to make this happen.”

The sibling duo aims to set an example in the film industry by making small changes that ultimately pave the way for a sustainable future. He added, “The industry, as a whole, is always open to incorporating all the best practices from global film-making industries, as well as create new norms that are unique to film-making in India. We can set an example for our community by doing such small things that can lead to big, impactful, positive changes. Clean Slate Filmz wanted to usher in the culture of waste segregation on sets so that we can do our bit for the environment. As an industry, we are constantly trying to do better and we are certain that this will become a norm at shoots going forward.”

In a country where celebrities are looked upon by masses, conscious decisions like these can influence the community to take better measures and thoughtful practices to protect the environment. However, not only her fans and followers, we hope other production houses follow the footsteps of Anushka Sharma and start practising waste management on their sets too.

Also Read: Anushka Sharma Said Women-Led Films Are Much Braver Because The Story Is The Hero. We Agree With Her