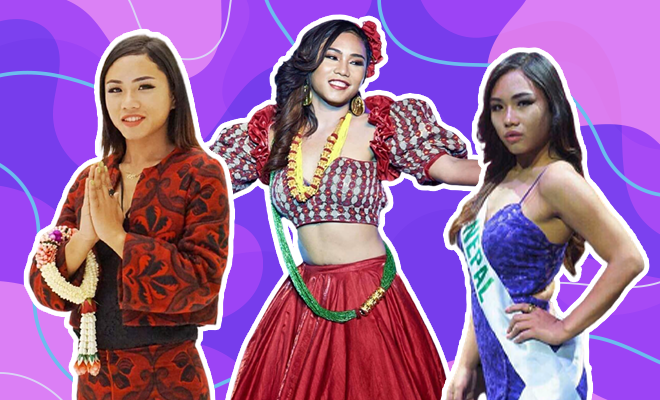 In a world where the society either refuses to acknowledge the third gender or look down upon them, trans women are fighting for their rights and finding their place, rather than admitting defeat. We know of so many people from the transgender community who have excelled in different walks of life, despite the struggle. And one of these areas where trans women are breaking, nay, smashing the ceiling is the glamour world. Recently, 21-year-old Angel Lama made history by becoming the first trans woman to be a finalist in the Himalayan nation’s most glamorous annual event, Miss Universe Nepal.

For as long as we know, beauty pageants have been solely associated with cisgender men and women. But now things are changing for the better. There are only a handful of countries in the world that allow transgender contestants to compete in their national pageants, and Nepal is one of the only three countries in Asia—apart from Myanmar and Mangolia—that do so. However, this is the first time that a trans contestant has become a finalist. In an interview with the Thomson Reuters Foundation, Lama said, “I have come to Miss Universe Nepal to show the diversity of people in the society. If I stand on that stage and showcase this, that will be the biggest crown ever.”

This happened because the management of the beauty pageant of Nepal decided to relax the bar for height, weight and overall appearance for the contestants. The only criterion for participation was that you had to be a “bold, beautiful and confident woman” of 18 to 28 years of age. This is great and we need Indian beauty pageants to follow suit.

Nepal ranks among fewer than a dozen countries in the world that accept trans contestants in their national pageants and only the third in Asia after Myanmar and Mongolia, according to LGBT+ activists #TransRightsAreHumanRightshttps://t.co/LW57YyzOrj

Also Read: Transgender Woman Has Opens Harassment-Free Cafe In Noida After Being Bullied

Beauty pageants are notorious for favouring a stereotypical idea of beauty and lacking inclusivity and diversity. The case isn’t any different in India, where the physical attributes of contestants to enter a beauty pageant are still the standardised height and weight of a slender and tall woman. Anything that doesn’t fit the society’s mould of beauty is not considered fit for the competition. And this needs to change. There are millions of girls like Lama in India who are trying to find recognition in the glamour world. When we have transgender supermodels like Anjali Lama in the industry walking the ramp for biggest fashion designers, what’s stopping the beauty pageants to allow trans women to enter the competition?

In case you didn’t know, there is an exclusive beauty pageant for trans women called Miss Trans Queen India which was founded by a cisgender woman, Reena Rai, in 2017. The winner represents the nation in the international stage at the Miss International Queen. However, when we talk about equality, we mean equality for all women, from every background, gender and sexual orientation. Trans women are women and deserve equal opportunities and platforms, like cisgender women. If the big league national beauty pageants like Femina Miss India become more inclusive and allow trans women to compete too, it would be a great step for equality. And, we would definitely want to see pageants getting as diverse and inclusive as beauty is.