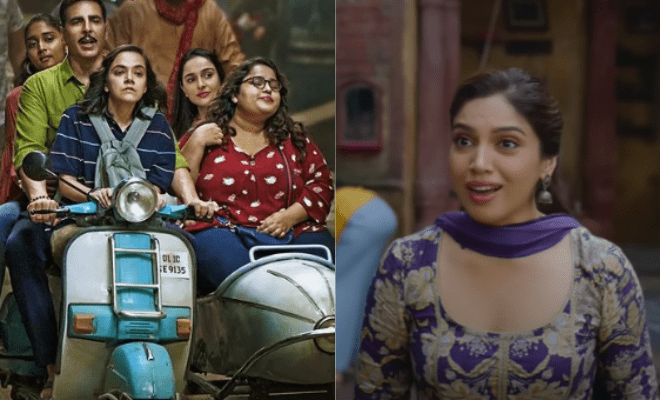 Someone Asked Akshay Kumar About Female Costars’ Tantrums At ‘Raksha Bandhan’ Trailer Launch. Bro, Why Didn’t He Shut Them Down?

Society has stereotyped notions of women and that is often reflected in the kind of questions women are asked. Taking jibes at a woman who is upset about something and asking her if she is PMS-ing or seeing a woman drive and making jokes about if the one’s sitting with her in the car will reach safely or even associating women with always being moody without any context, etc etc. These are some of the commonly heard sexist notions about women and it is about time that such ideas not be entertained by women even in the name of “harmless humour”.

When it comes to female celebrities, they are always asked at press conferences when they will get married or if they already are then how are they managing their career and personal lives, or there will be someone from the media who will ask dumb questions about outfits even. Firstly, these questions are outright annoying as they are always aimed at women. Secondly, I want to ask these celebrities who diplomatically answer such questions why do not shut down journalists asking such questions?

Okay to give you a little context, recently at a press conference, a journalist asked Akshay Kumar if he had to handle any ‘sweet tantrums’ from his all-female co-star cast on the sets of his upcoming film Raksha Bandhan. To this, Kumar responded by saying that nobody on the sets did any such thing and in return asked the journalist what kind of tantrums did they have to handle in real life.

Now, being a journalist, shouldn’t they have thought twice before asking such a question? Or just because they want to ask something for the sake of it, they end up asking such nonsense? What is all the more annoying is that the question stereotyped women to be tantrum-throwers, so did Bhumi Pednekar, who was also present when this happened, have nothing to say about this? Shouldn’t she have stepped up and shut down such a dumb question asked by the journalist?

This episode made me remember a video when Priyanka Chopra shut down a male journalist asking her if she’s a feminist and if she should defend a man getting slapped when he eve-teases. I vividly remember Priyanka getting shocked by the questions and the response she gave to him was so so good! She aptly pointed out how women and men need to be judged on the scale of capabilities and not gender.

On a related note, the media needs to understand that they do not need to ask such sexist questions to female actors if they would not ask the male ones the same. It is this silent encouragement that does not stop people from asking such questions to women. Instead of asking about career choices, roles or ambitions, people choose to ask about something like this, it shows what kind of story they are wanting to fish out from here. They want to write about something that will “sell” and what sells is asking sexist questions to women!

Twitter User Calls Out Deo Ad That Makes Light Of Women’s Constant Fear Of Rape. Who Is Approving This Crap?