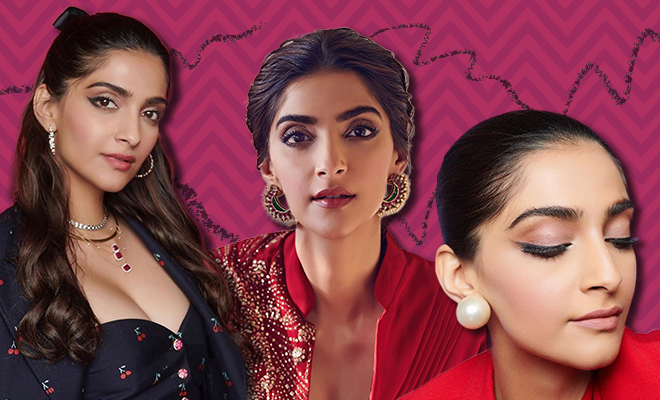 Sonam Kapoor Has Been Serving up Some Major Eyeliner Inspiration And You Can Actually Do This!

The art of drawing on a perfect eyeliner is an underrated one! When it comes to makeup anxiety, the lack of a steady hand has crushed many a winged-liner dreams. Then there are the “tricks” you can pull to nail the perfect winged liner, but between you and us, having a knife so close to our eyes terrifies us. This, in turn, takes us down a spiral of google searches, looking for easy-to-do but effective eyeliner styles that are not boring.

Which is why got so psyched when Sonam Kapoor Ahuja not only started serving up major fashion but beauty looks as well! The actress is right now promoting her upcoming film The Zoya Factor and vlogging about it, may we add. Other than the fact that she’s managed to pull off doing only red in some form, her eye makeup has been on point!

Sonam’s makeup artist Arti Nayar has been experimenting with some chic eyeliner styles and we have taken notes!

Given that the cat-eye liner is a happening trend in the makeup sphere right now, we aren’t surprised to see Sonam do it. She did add a twist to it though! Instead of complicating it with a full lash, the eye was only lined partially with kohl, focusing on the outer ‘V’. Love!

Desi girls will attest to this…it is so much easier to put on kajal than a liquid liner. Years of practice have gotten us well versed with it and this ability can be exploited to our advantage. Instead of extending our liquid liners, we can just use kohl to add a wingtip. We love Sonam’s dainty little detail in this one!

We are in love with the big eyes Sonam is serving in this look! The trick is to extend one’s liner with a ladder step detail instead of a straight ascension. Complement it with a half filled-in lower lash with kohl or highlighter and we have on our hands a gorgeous sets of peepers!

Contrary to popular belief, you don’t always have to rely on a thick liner for a dramatic eye look. Sonam paired her glittery and bronzed lashes with a dainty stroke along the upper lashline, extending it just a little for effect. This sharp detail combined with the otherwise soft makeup makes for an interesting look indeed!

While the half upper lash is not nearly a new look, the style hasn’t gotten it’s due in the league of chic liner styles! Sonam makes an excellent case for high glam half liners with her blend of the highlighted lid+upper lashline fill…it looks so good!

ALSO READ: Sonam Kapoor Paired The Tiniest Bag With Her Custom Gown And We Might Know What’s In It!

Apart from the obvious gems like fashion and beauty secrets, Sonam’s vlogs are a hoot and half to watch! Check out one of the many BTS moments from her The Zoya Factor promotional events:

Alia Bhatt’s First Music Video Is Out And The Lyrics Imply That All Women Are Gold Diggers. What A Ton Of Rubbish!