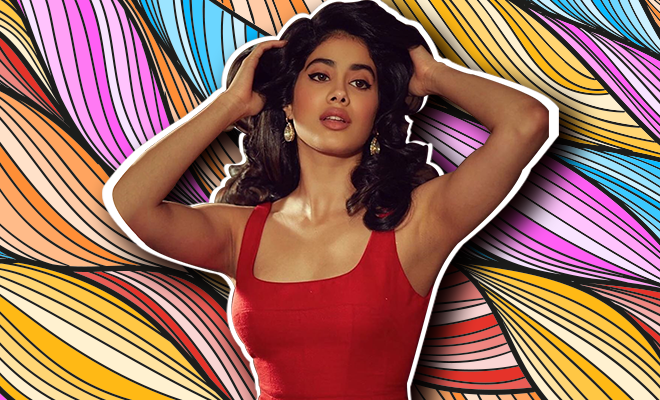 Usually, when you have a dog in the house, one of the most frequent complaints from your mother is that there’s too much hair in being shed in the house. And mostly when she talks about it, I point at my unsuspecting dog, claiming he’s the culprit. The hair though, is everywhere, from your bed sheets to your clothes, kitchen corners to laptop screens, there is honestly no escaping this. Except, off late she’s spotted some long tresses which though I have been trying to pin on my dog, is long, dark and straight and most definitely mine. But with what Janhvi Kapoor has to reveal about her hair care regime, seems like I won’t be contributing to it for very long. Yay!

In a recent magazine interview with Vogue, the Dhadak actress Janhvi Kapoor spilled a few secrets about her transcendent glow and what goes behind her long and luscious hair that all of us envy. While the actress has naturally been blessed with a nearly flawless skin and a good head of hair, the amount of care that goes down in maintaining these is tremendous. Trust me, we know. So naturally when Janhvi Kapooor decided to talk about he neat tricks she has up her sleeves, or in this case her scalp, we were all ears.

Turns out, we’ve been stuffing the food at all the wrong places all this while, as she shared, “I put a lot of food in my hair—eggs, beer, and methi. Some people also go with onion juice but methi is where I draw the line.” And the result? Silky, smooth flowing locks of hair. While beer and eggs we have heard of for hair, methi was something we weren’t expecting would be on the actress’ list.

Janhvi also opened up about the haircare routines and habits that have been passed along to her sister and herself from their late mother Sridevi, who too, had fabulous hair. She said, “[Mom] would make our hair oil at home with dried flowers and amla, and she’d make sure she gave me and Khushi an oil massage every three days,” For whoever thought that Bollywood stars are above being subjected to a champi by dear mom, we’ve been proven wrong. Mom’s are all the same, and always know what’s best. Clearly.

Also Read : Janhvi Kapoor Is Enjoying The Perfect Working Vacation With Her Sister And Friends In Manali And We’re Jealous!

Then moving on to discuss what she does for that radiant glow on her skin, Janhvi shared with us the names of some more foods that she, you guessed it right, doesn’t eat but applies to her face. When asked about it, she said, “Whatever leftover [fruit] we had from breakfast, we’d put on our face.”And honestly, that is the best advice we’ve received for not just a facial glow but also to ensure no food is wasted.

No wonder the actress is always looking on point even in her no-make up selfies. It is all the food she doesn’t eat but applies to her hair and face!