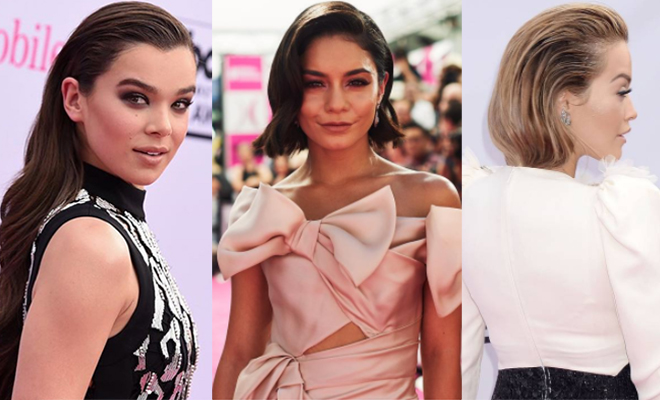 The Best Hairdos From The 2017 Billboard Music Awards

Music royalty assembled under one roof a couple of hours ago for the 2017 Billboard Music Awards. While some of us are still reeling from Cher and Celine Dion’s performances, we managed to keep an eye on how everyone showed up to the red carpet.

Celebrities like Drake, Lea Michelle, Micky Minaj, Miley Cyrus, and Lorde were in attendance, and as much as we like discussing their outfit choices, it’s the hair that had all my attention. Unlike most major events where you tend to spot a theme when the hair is concerned, the BBMAs had a variety and it seemed like no two hairdos were the same.

That’s just as well, because it gives us so much more to take inspiration from, right?

Keep scrolling to see our favourite hairdos from the musical evening.

A top knot like Lea’s is the need of the hour, especially on hot summer days. Fuss-free but still elegant, the middle parted top knot had to be one of the best ‘dos we spotted at the BBMAs.

Vanessa Hudgens hosted the awards and changed so many outfits during the entire show, we just couldn’t keep track. One thing that didn’t change was her hair. And rightfully so, because that slickly waved style is a masterpiece, if I may say so myself!

One of the most effortless and probably the least worked on hairdo of the evening belonged to Miley Cyrus. Salty, disheveled waves were simply topped with a fedora and she still looked like a bomb!

That ponytail might look easy to achieve, but don’t be fooled! Gwen Stefani’s neat ponytail is definitely something you need to try to your next Sunday brunch, along with that arm candy, of course.

The easiest way to a faux bob is to tuck the length of your hair into the back of your shirt. Rita’s fierce wet look front had me thinking she’d had a haircut. But once I saw the back, it all fell into place.

Celine Dion’s hairdo was as much of a hit as her outfit and even her performance last night. The semi-messy updo looks highly meticulous; just look at how each strand on her head is perfectly defined!

Like Rita, Hailee Steinfeld went for a slightly wet look last night. While the front was neatly patted down, the rest of her hair ran down her back in the most gorgeous, bouncy waves.

A writer, social media expert, and self-proclaimed beauty junkie, Anushka's alter ego Pocket Stylist is a platform to showcase her everyday style, must-haves, and tips. A graduate from the London College of Fashion, her taste is current, trendy, and highly accessible. She’s also a certified hair stylist.